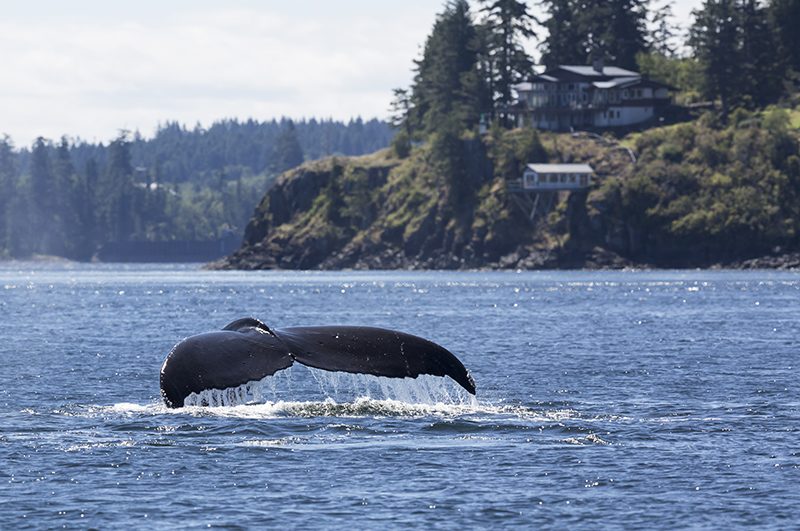 An Island destination for a different kind of traveller, Vancouver Island is home to migrating wildlife at different parts of the year. While some like to escape frigid temperatures, and enjoy our temperate winters, others head south as we begin to cool down. Year round, the Island is abundant with food sources, and the changing conditions cater to various palates.

The journeys of these great species—whales, birds—are stories of great distance and great reward. Read on to learn about wildlife migrations on Vancouver Island and where to spot moving species.

Quite possibly the most well-known migration of the area is that of some of the whales. While resident orcas are apt to stick around all year long (hence the name), and transient orcas tend to inhabit a larger area of the pacific northwest but don’t migrate, there are a couple of species of marine mammals that tend to come and go on a migratory pattern.

Grey whales are the champions of migration; no other animal travels are far as these jet setters. Calving areas in Mexico mark one leg of their journey, while the frigid waters of the Arctic mark the other. They cruise by Vancouver Island starting in early February, and some even like it so much they stick around for the summer months before returning south. The Pacific Rim Whale Festival celebrates the migration of these ocean neighbours, with educational talks, chowder chowdowns, and live music. Read more about this year’s festival at PacificRimWhaleFestival.com.

If there’s one thing on the mind of a Brant goose, it’s where to find the next big feast. These geese spend the winter months floating on the warm waters of Mexico, and as it starts to thaw out further north, they make their way up to Vancouver Island, knowing that they’ll be welcomed with a feast fit for a king.

In late March, the herring population begins to spawn, turning the ocean a bright turquoise hue and offering up quite the snack for the local sea lions and visiting Brant geese. It’s a springtime harvest and one that is celebrated by the local community through the Brant Wildlife Festival. Take a guided birdwatching walk, or indulge in some forest bathing at the festival this year.

Perhaps a little unusual compared to the other migrating wildlife around Vancouver Island who prefer to visit us when the temperatures begin to climb, the trumpeter swan calls the Island their winter home. These arctic snowbirds are used to much more frigid temperatures, so they’re happy to spend the winter where it’s a little warmer—a rainy, yet comfortable winter escape.

Climbing chutes and cascading waters, the salmon of the Pacific Ocean begin a treacherous journey in the fall months to spawn up the freshwater rivers of the Pacific Northwest. They return to the same spot where they themselves were spawned, a feat of nature that’s not well understood.

They lend a red colour to the river, with some species morphing into ember red creatures with hook mouths. Visitors flock to see the currents splash with the upstream salmon, dodging hungry wolves, eagles and bears.

Intrigued by Vancouver Island’s wildlife? Book a wildlife viewing tour to see these creatures in person!